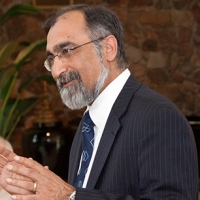 For 20 years, Dr. Sultan Darvesh has searched for a key to unlocking the mystery of Alzheimer’s disease. A neurologist and a chemist, Dr. Darvesh felt he would find such a key in the brain chemistry of people who had died of the disease. With this vision in mind, he worked to establish the Maritime Brain Tissue Bank, where he could carefully store donated brains and study how brains affected by Alzheimer’s disease differ from healthy brains and those affected by other forms of dementia.

“We discovered that an enzyme called butyrylcholinesterase, or BChE, gathers around the plaques and tangles you find in Alzheimer brains,” says Dr. Darvesh, a professor in the Departments of Medicine (Neurology and Geriatric Medicine) and Medical Neuroscience. “When we found that it ignores similar plaques in normal brains, we realized we had discovered a unique marker of Alzheimer’s disease.”

From this discovery, Dr. Darvesh is pioneering the world’s first technology for diagnosing Alzheimer’s disease in its early stages. He and his collaborators have found a compound that binds with BChE in the living brain and lights up in PET and SPECT scans to reveal the disease. “Until now, the only way to positively identify Alzheimer’s disease has been to examine the patient’s brain after death,” notes Dr. Darvesh. “Our new technology is a huge advance that opens the door to the possibility of stopping Alzheimer’s in its tracks.”

Dr. Darvesh has also found that BChE plays an active role in the Alzheimer’s disease process. He and his collaborators are now working to identify a compound that will block BChE and prevent Alzheimer’s from taking hold.

“The Maritime Brain Tissue Bank is fundamental to our work,” says Dr. Darvesh, “to what we’ve learned so far, and to our search for a cure.”

In 2014, Members of the Sobey family celebrated  the appointment of Dr. Sultan Darvesh as the new “DMRF Irene MacDonald Sobey Endowed Chair In Curative Approaches to Alzheimer’s Disease”. As the name of his research chair suggests, Dr. Darvesh aims to halt the devastating impact of this disease on our aging society.

The application process is easy. If your project fits our criteria simply follow this link and get started.